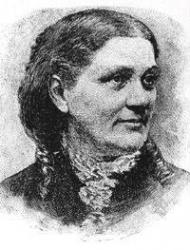 Lucy Larcom (March 5, 1824 – April 17, 1893) was an American teacher, poet, and author. She was one of the first teachers at Wheaton Female Seminary (now Wheaton College) in Norton, Massachusetts, teaching there from 1854 to 1862. During that time, she co-founded Rushlight Literary Magazine, a submission-based student literary magazine which is still published. From 1865 to 1873, she was the editor of the Boston-based Our Young Folks, which merged with St. Nicholas Magazine in 1874. In 1889, Larcom published one of the best-known accounts of New England childhood of her time, A New England Girlhood, commonly used as a reference in studying antebellum American childhood; the autobiographical text covers the early years of her life in Beverly Farms and Lowell, Massachusetts.
Wikipedia Biography
TextsTunesHymnals