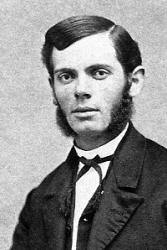 Spencer Lane USA 1843-1903. Born at Tilton, NH, he served in the 8th NH Infantry during the American Civil War. After the war, he studied at the New England Conservatory and taught vocal and instrumental music at Oneida and Utica, NY. He married Isabel F. (no information on children was found). He later moved to Woonsocket, RI, where he ran a music store and served as organist and directed the choir for the St. James Episcopal Church for 13 years. He moved to Monson, MA, then to Richmond, VA, and in 1896 to Baltimore, MD. In Baltimore he worked for the music firm of Sanders & Stayman and was music director at the All Saints Protestant Episcopal Church. While at Woonsocket, his pastor gave him the hymns for an evening service, one of whose tune he didn’t care for, so he composed another tune for it, ‘Penitence’. That is his only hymn contribution. He was an author and music composer: “My beloved, I’ll think of thee”, “A dream – grand march”, others. He died at Reedville, VA.