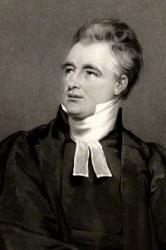 Judkin, Thomas James, M.A., son of a London tradesman, was born at London, July 25, 1788, and was educated at Caius College, Cambridge (B.A. 1815, M.A. 1818), mainly at the expense of Sir William Curtis, an alderman of the City of London. After taking Holy Orders in 1816, he held various curacies, until 1828, when he was preferred as minister of Somers Chapel, St. Pancras, London. He died Sept. 11, 1871. He published Twelve Signs of the Times; Popish Aggression; and other works, including a volume of sonnets as Bygone Moods. His hymns were published mainly for the use of his own congregation and appeared as:—
(1) Church and Home Psalmody; being a Collection of Psalms from the Old and New Versions, and Original Hymns, for Congregational and Domestic Purposes, 1831. In 1834 this was enlarged and issued as (2) Church and Home Melodies, being a New Version of the more devotional parts of the Psalms, together with a Version of the Collects, and Original Hymns; for Congregational and Domestic purposes. This was divided into (1) "Spirit of the Psalms." (2) "Collects in Verse." (3) "Hymns on the Gospels," and (4) "Original Hymns." (3) The 3rd ed. was published in 1837. At the end of the volume two title-pages were supplied, that the book, if so desired, might be divided into two, one as The Spirit of the Psalter; The Collects in Verse; together with Hymns suggested by the Gospels for the day throughout the Year; and the other, Sacred Melodies; or Original Hymns for Congregational and Domestic Use,
From the 1st ed. of his Collection the following hymns are in common use:—
1. Enthroned is Jesus now. Ascension.
2. Holy Spirit, Fount of blessing. Whitsuntide.
3. How shall I pray, 0 Lord, to Thee. Prayer.
4. We are journeying to a place. Heavenward.
5. When in the dark and cloudy day. Jesus, all in all.