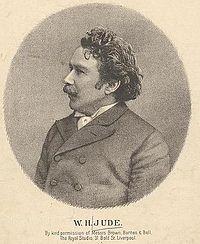 William Herbert Jude United Kingdom 1851-1922. Born at Westleton, Suffolk, England, his family moved to Norfolk. A precocious child, by age eight he was composing music for school plays. Educated at the Liverpool Organ School and East Liverpool College of Music, he became college principal for awhile. He married Catherine Helena Haigh. They had no children. He became a composer, editor, and organist. He was organist for the Blue Coat Hospital & School and Stretford Town Hall near Manchester, while teaching and lecturing. After 20 years there he was appointed organist at the Exeter Hall in London, a primary venue and Christian Centre owned by the YMCA on the Strand in London. As a recitalist, he was asked to “open” over 1000 new organs across the UK, Ireland, and Australia. He was considered the most brilliant organist of his day. He wrote at least two operettas: “Innocents abroad” (1882) and “The mighty deep” (1917). His compositions were frequently religious. He admired British evangelist, Rodney “Gipsy” Smith and published a collection of Smith’s favorite solos in 1903. He also supported the temperance movement. He toured Australia and New Zealand 1890-1894. In 1904 he served as editor for several musical periodicals, including “Monthly Hymnal”, “Minister of music”, and “The Higher life”. He also compiled several hymnbooks, including “Mission hymns” (1911”), and “Festival hymns” (1916). He wrote a number of works on music. He died in London.