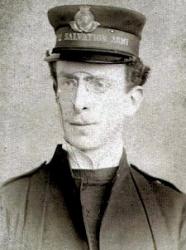 Joy joined the Salvation Army (SA) in Canterbury, then played in the band at Folkestone, and became an SA officer in 1894. He went on serve the SA Corps at Tunstall, then the SA International headquarters in 1917, where he was Under Secretary in the Foreign Office. After 1919, he served as Immigration Secretary in western Canada, and in 1932 became editor-in-chief of The War Cry in South Africa. He rose to the rank of SA colonel, and retired in 1938.