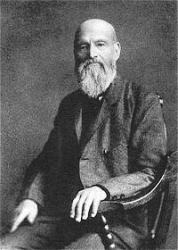 Johnson, Erastus. (April 20, 1826--June 16, 1909, Waltham, Massachusetts). This man whose life was singularly active and varied was born in a logging camp at Lincoln, Maine. He was buried in Jackson, Maine. He entered the Academy at Calais, Maine, at the age of fifteen, spent two years there, taught school for the next six, and then entered Bangor Theological Seminary. His health failed, and, threatened with the loss of his sight, was compelled to give up preparation for the ministry. On the advice of his physician he took a sea voyage, embarging on the ship Gold Hunter en route from New York to California. The crew of the ship mutinied just before rounding Cape Horn and as Johnson was the only person on board who knew anything about navigation, other than the captive officers, he was pressed into service to take the ship on to its destination, San Francisco. This he was able to do successfully. Not a seeker after California's newfound gold, he was, variously, a rancher in California, a farmer in Washington state, in the oil business in Pennsylvania for some twenty years, and again a farmer in Maine until his retirement in Waltham, Mass. As ardent Methodist, always interested in religious work, especially in the Y.M.C.A., he was a lifelong student of the Bible, a fluent speaker, and a musician of moderate attainment. He published one book of poems, most of which were of interest only to members of his immediate family.

Sources: Correspondence with Mrs. Julia Johnson Howe, daughter of the subject of this sketch; Our Hymnody, Robert G. McCutchan; Hymns of Our Faith, Reynolds.