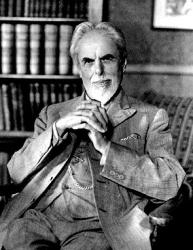 Housman studied art at the Lambeth School of Art and the Royal College of Art. He had great success as an illustrator, but when his eyesight began to fail, he turned to writing books and plays. He wrote 80 books during his lifetime. He often seemed to fall afoul of the censors, though, for religious and political reasons. A committed socialist and pacifist, in 1907, he helped found the Men’s League for Women’s Suffrage. He was also an honorary associate of the Women Writers’ Suffrage League. His works include:
Jump-to-Glory Jane, by Meredith
Goblin Market, by Christiantina Rossetti, 1893
The End of Elfintown, by Jane Barlow, 1894
Spikenard, 1898
The Sensitive Plant, 1898
Bethlehem, 1902
The Blue Moon, 1904
Angels and Ministers, 1921
Little Plays of St. Francis, 1922
Victoria Regina, 1937
The Unexpected Years, 1937 (autobiography)

Laurence Housman (/ˈhaʊsmən/; 18 July 1865 – 20 February 1959) was an English playwright, writer and illustrator during the Victorian era. He studied art in London. He was a younger brother of the poet A. E. Housman.
Wikipedia Biography
TextsTunesHymnals