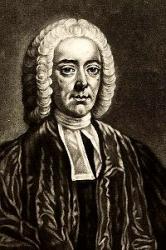 Hervey, James, M.A., son of the Rector of Weston-Favell and Collingtree, diocese of Peterborough, was born at Hardingstone, near Northampton, Feb. 14, 1714, and educated at the Free Grammar School, Northampton, and Lincoln College, Oxford. At Oxford he had John Wesley, then a Fellow of Lincoln, as his tutor. Ordained in 1736, he assisted his father for a short time, and then became Curate of Dummer. At the end of a year he passed on to Devonshire, first as a guest of Mr. Orchard, at Stoke Abbey, and then as Curate of Bideford. In 1742 he left Bideford and rejoined his father, whom he succeeded as Rector of Weston-Favell and Collingtree in 1752. He died Dec. 25, 1758. His controversial and religious writings were very popular at one time, but have fallen out of use. His Meditations among the Tombs (suggested by a visit paid to Kilkhampton Church, Cornwall), Reflections on a Flower Garden, and a Descant on Creation, were published in one volume in 1746; and his Contemplations on the Night, and The Starry Heavens, with A Winter Piece, were published as a second volume in 1746. A complete edition of his Meditations and Contemplations were published with a Memoir (Lond., W. Tegg) in 1860. From these the following hymns have come into common use:—
1. Make the extended skies your tomb. The True Life. This was given in the Meditations among the Tombs, 1746, in 4 stanzas of 4 lines as the conclusion of a meditation on “The only infallible way of immortalizing our characters":—
"The only infallible way of immortalizing our characters, a way equally open to the meanest and most exalted fortune is, 4 To make our calling and election sure/ to gain some sweet evidence that our names are written in heaven.”.....

"Make the extended skies your tomb;
Let stars record your worth," &c.

Its use in modern hymn-books is limited.
2. Since all the downward tracts of time. Providence. This appeared in the Reflections on a Flower Garden, 1746, in 3 stanzas of 4 lines. It is given as a note to the following sentence: "Be still, then thou uneasy mortal: know that God is unerringly wise; and be Assured that, amidst the greatest multiplicity of beings, be does not overlook thee.".....

" *Permittas ipsis expendere numinibus, quid
Conveniat nobis, rebusque tit utile nostris.
Nam pro jucundis aptissima quoeque dabunt dii:
Carior est illis homo, quam sibi. —Juv.
"Since all the downward tracts of time
God's watchful eye surveys;
0! Who so wise to choose our lot,
And regulate our ways?
"Since none can doubt His equal love,
Unmeasurably kind;
To His unerring, gracious will
Be ev'ry wish resign'd.
“Good when He gives, supremely good
Nor less, when He denies:
E'en crosses, from His sovereign hand,
Are blessings in disguise."

In addition to this hymn being in common use in this its original form, it is often found in 5 stanzas and beginning, “Since all the downward tracks of time."