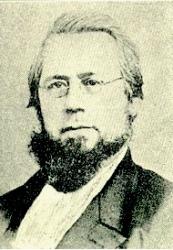 Harbaugh, Henry, D.D., born in Franklin Co., Pennsylvania, Oct. 24, 1817, was of Swiss descent. In early life he was a farmer, carpenter, and teacher; but in 1840 he entered Marshall College, Mercersburg. Entering the ministry of the German Reformed body, he became, in 1844, Pastor at Lewisburg, Lancaster and Lebanon, Pennsylvania, and in 1864 Professor in Theology at Mercersburg. He died Dec. 27, 1867. He was Editor of the Guardian and the Mercersburg Review, in which he advocated what was called "Mercersburg Theology." His published works include sundry books about Heaven; Poems, Philadelphia, 1860, and Hymns & Chants for Sunday Schools, Lebanon, 1861. This last includes his hymns. The best known and most widely used of his compositions are:—