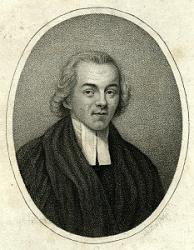 Goode, William, M.A., born in Buckingham, April 2, 1762, and received his early education, first in that town, and then under the care of the Rev. T. Bull, a Dissenting minister, at Newport Pagnel. Having a strong inclination for Holy Orders, he left the business in which he was engaged with his father, and, in 1780, entered Magdalen Hall, Oxford, where he graduated B.A. in 1784, and M.A., 1787. On taking Holy Orders in 1786, he became curate of Abbots Langley, Herts; then of St. Ann's, Blackfriars, and subsequently rector of the latter parish, adding thereto one or two lectureships. He died April 15, 1816. Mr. Goode's interest in foreign mission work was very earnest, and took a practical turn in assisting to found the Church Missionary Society. His prose works include Sermons, 1812 ; and Essays on all the Scriptural Names and Titles of Christ, &c, which were reprinted from the Christian Guardian, 1813-1816. His Works, together with a Memoir, were published in 1822 (6 vols.), and edited by his son. His version of the Psalms was published as:—

An Entire New Version of the Book of Psalms in which an attempt is made to accommodate them to the worship of the Christian Church, in a variety of measures now in general use, with original Preface and Notes, critical and explanatory, By the Rev. William Goode, M.A., Rector of St. Andrew, Wardrobe, and St. Ann, Blackfriars; Lecturer of St. John of Wapping; and Lady Camden's Tuesday Evening Lecturer at the Church of St. Lawrance, Jewry. In two volumes. London: Printed for the Author by W. Wilson . . . and sold by Rivingtons, &c, 1811. 2nd ed., 1813; 3rd ed., 1816.

Pratt, in 1829; Bickersteth, in 1833; and Kemble in 1853, made extensive use of this version of the Psalms, the latter including nearly fifty pieces in his Collection. Most of these have fallen out of Use, one only being retained in Kemble's New Church Hymn Book, 1873. In modern hymnals in Great Britain and America about twenty of Goode's versions are still in common use. These include,"Jesus, with Thy salvation blest"; "Lord, I delight to find my place"; "Thou gracious God and kind"; "With songs of grateful praise," &c. The following are still in common use:—
1. Crown His head with endless blessing. Ps. cxviii.
2. Far as the isles extend. Ps. lxxii.
3. How blest are they whose hearts sincere. Ps. cxix.
4. How blest the man with mercy crowned. Ps. xxxii.
5. If the Lord bad not heard, may Israel now say. Ps. cxxiv.
6. Jesus, with Thy salvation blest. Ps. xx.
7. Let Thy grace, Lord, make me [us] lowly. Ps. cxxxi.
8. Lo in Gethsemane's dark shade. Ps. lxxxviii.
9. Lo, the mighty God appearing. Ps. l.
10. Lord, I delight to find my place. Ps. xxvi.
11. Lord of mercy, just and kind. Ps. xiii.
12. Lord, Thy Church hath seen Thee rise. Ps. Ixviii.
13. Now let Our songs arise. Ps. xcvi.
14. 0 my God, by Thee forsaken. Ps. xlii.
15. Prepare a new song Jehovah to praise. Ps. cxlix.
16. Songs anew of honour framing. Ps. xcviii.
17. Thou gracious God and kind. Ps. Ixxix.
18. Though sinners boldly join. Ps. ii.
19. With songs of grateful praise. Ps. cvii.