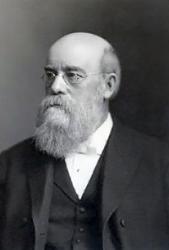 Washington Gladden (1836-1918) was called to the First Congregational Church in Columbus, OH in 1882 and remained there for 32 years. In 1883-84 he was known for his success in fighting the corrupt Tweed Ring, for arbitrating the Telegraphers' Strike and the Hocking Valley Coal Strike. He attacked John D. Rockefeller, Sr. for giving $100,000 of "tainted money" to the Congregational Church's Foreign Missions program. Throughout his ministry he emphasized applying the gospel to life in America. He wrote "O Master, let me walk with thee" in 1879.

Mary Louise VanDyke
===================
Gladden, Washington, was born at Pottsgrove, Pennsylvania, Feb. 11, 1836; was educated at Williams College: and entered the Congregational Ministry. He was for some time editor of the New York Independent, and of the Sunday Afternoon. In the Sunday Afternoon, his hymn, "O Master, let me walk with Thee" (Walking with God), appeared in 3 stanzas of 8 lines, in March 1879. Of these stanzas i. and iii. are in Laudes Domini, 1884, and others.

Gladden, W., p. 1565, ii. Dr. Gladden has been Pastor of the First Congregational Church, Columbus, Ohio, since 1882. His hymn-writing has not been extensive. The most popular of his hymns is "0 Master, let me walk with Thee," noted on p. 1565, ii. It has come into somewhat extensive use during the last ten years. Additional hymns in common use include:—
1. Behold a Sower from afar. [The Kingdom of God.] In the Boston Pilgrim Hymnal, 1904, this is dated 1897.
2. Forgive, 0 Lord, the doubts that break Thy promises to me. [Doubting repented of.] Dated 1879, in The Pilgrim Hymnal, 1904.