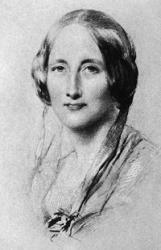 English novelist and biographer, born on the 29th of September 1810 in Lindsay Row, Chelsea, London, since destroyed to make way for Cheyne Walk. Her father, William Stevenson, came from Berwick-on-Tweed, and had been successively Unitarian minister, farmer, boarding-house keeper for students at Edinburgh, editor of the Scots Magazine, and contributor to the Edinburgh Review, before he received the post of Keeper of the Records to the Treasury, which he held until his death. His first wife, Elizabeth Holland, was Elizabeth Gaskell's mother. She was a Holland of Sandlebridge, Knutsford, Cheshire, in which county the family name had long been and is still of great account. She died a month after her daughter was born, and the babe was carried into Cheshire to Knutsford to be adopted by her aunt, Mrs. Lumb. Thus her childhood was spent in the pleasant environment that she has idealized in Cranford. At fifteen years of age she went to a boarding-school at Stratford-on-Avon, kept by Miss Byerley, where she remained until her seventeenth year. Then came occasional visits to London to see her father and his second wife, and after her father's death in 1829 to her uncle, Swinton Holland. Two winters seem to have been spent in Newcastle-on-Tyne in the family of William Turner, a Unitarian minister, and a third in Edinburgh. On the 30th of August 1832 she was married in the parish church of Knutsford to William Gaskell, minister of the Unitarian chapel in Cross Street, Manchester, and the author of many treatises and sermons in support of his own religious denomination. William Gaskell held the chair of English history and literature in Manchester New College.

Henceforth Mrs. Gaskell's life belonged to Manchester. She and her husband lived first in Dover Street, then in Rumford Street, and finally in 1850 at 84 Plymouth Grove. Her literary life began with poetry. She and her husband aspired to emulate George Crabbe and write the annals of the Manchester poor. One poetic "Sketch", which appeared in Blackwood's Magazine for January 1837, seems to have been the only outcome of this ambition. Henceforth, while in perfect union in all else, husband and wife were to go their separate literary ways, Mrs. Gaskell to become a successful novelist, whose books were to live side by side with those of greater masters, Mr. Gaskell to be a distinguished Unitarian divine, whose sermons, lectures and hymns are now all but forgotten. In her earlier married life Mrs. Gaskell was mainly occupied with domestic duties -- she had seven children -- and philanthropic work among the poor. Her first published prose effort was probably a letter that she addressed to William Howitt on hearing that he contemplated a volume entitled Visits to Remarkable Places. She then told the legend of Clopton Hall, Warwickshire, as she had heard it in schooldays, and Howitt incorporated the letter in that book, which was published in 1840. Serious authorship, however, does not seem to have been commenced until four or five years later.

In 1844 the Gaskells visited North Wales, where their only son Willie died of scarlet fever at the age of ten months, and it was, it is said, to distract Mrs. Gaskell from her sorrow that her husband suggested a long work of fiction, and Mary BartonHowitt's Journal, where "Libbie Marsh's Three Eras" and "The Sexton's Hero" appeared in 1847. But it was Mary Barton: A Tale of Manchester Life that laid the foundation of Mrs. Gaskell's literary career. It was completed in 1847 and offered to a publisher who returned it unread. It was then sent to Chapman & Hall, who retained the manuscript for a year without reading it or communicating with the author. A reminder, however, led to its being sought for, considered and accepted, the publishers agreeing to pay the author £100 for the copyright. It was published anonymously in two volumes in 1848. This story had a wide popularity, and its author secured first the praise and then the friendship of Carlyle, Landor and Dickens. Dickens indeed asked her in 1850 to become a contributor to his new magazine Household Words, and here the whole of Cranford appeared at intervals from December 1851 to May 1853, exclusive of one sketch, reprinted in the "World's Classics" edition (1907), that was published in All the Year Round for November 1863. Earlier than this, indeed, for the very first number of Household Words she had written "Lizzie Leigh." Mrs. Gaskell's second book, however, was The Moorland Cottage, a dainty little volume that appeared at Christmas 1850 with illustrations by Birket Foster. In the Christmas number of Household Words for 1853 appeared "The Squire's Story", reprinted in Lizzie Leigh and other Tales in 1865. In 1853 appeared another long novel, Ruth, and the incomparable Cranford. This last -- now the most popular of her books -- is an idyll of village life, largely inspired by girlish memories of Knutsford and its people. In Ruth, which first appeared in three volumes, Mrs. Gaskell turned to a delicate treatment of a girl's betrayal and her subsequent rescue. Once more we are introduced to Knutsford, thinly disguised, and to the little Unitarian chapel in that town where the author had worshipped in early years. In 1855 North and South was published. it had previously appeared serially in Household Words. Then came in 1857 the Life of Charlotte Brontë, in two volumes. Miss Bronte, who had enjoyed the friendship of Mrs. Gaskell and had exchanged visits, died in March 1855. Two years earlier she had begged her publishers to postpone the issue of her own novel Villette in order that her friend's Ruth should not suffer. This biography, by its vivid presentation of the sad, melancholy and indeed tragic story of the three Brontë sisters, greatly widened the interest in their writings and gave its author a considerable place among English biographers. But much matter was contained in the first and second editions that was withdrawn from the third. Certain statements made by the writer as to the school of Charlotte Brontë's infancy, an identification of the "Lowood" of Jane Eyre with the existing school, and the acceptance of the story of Bramwell Brontë's ruin having been caused by the woman in whose house he had lived as tutor, brought threats of libel actions. Apologies were published, and the third edition of the book was modified, as Mrs. Gaskell declares, by "another hand." The book in any case remains one of the best biographies in the language. An introduction by Mrs. Gaskell to the then popular novel, Mabel Vaughan, was also included in her work of this year 1857, but no further book was published by her until 1859, when, under the title of Round the Sofa, she collected many of her contributions to periodical literature. Round the Sofa appeared in two volumes, the first containing only "My Lady Ludlow", the second five short stories. These stories reappeared the same year in one volume as My Lady Ludlow and other Tales. In the next year 1860 appeared yet another volume of short stories, entitled Right at Last and other Tales. The title story had appeared two years earlier in Household Words as "The Sin of a Father." In 1862 Mrs. Gaskell wrote a preface to a little book by Colonel Vecchj, translated from the Italian -- Garibaldi and Caprera, and in 1863 she published her last long novel, Sylvia's Lovers, dedicated "to My dear Husband by her who best knows his Value." After this we have in 1863 a one-volume story, A Dark Night's Work, and in the same year Cousin Phyllis and other Tales appeared. Reprinted short stories from All the Year Round, Cornhill Magazine, and other publications, tend to lengthen the number of books published by Mrs. Gaskell during her lifetime. The Grey Woman and other Tales appeared in 1865.

Elizabeth Gaskell died on the 12th of November 1865 at Holyburn, Alton, Hampshire, in a house she had just purchased with the profits of her writings as a present for her husband. She was buried in the little graveyard of the Knutsford Unitarian church. Her unfinished novel Wives and Daughters/ was published in two volumes in 1866.

Gaskell has enjoyed an ever gaining popularity since her death. Cranford has been published in a hundred forms and with many illustrators. It is unanimously accepted as a classic. Scarcely less recognition is awarded to the Life of Charlotte Brontë, which is in every library. The many volumes of novels and stories seemed of less secure permanence until the falling in of their copyrights revealed the fact that a dozen publishers thought them worth reprinting. The most complete editions, however, are the "Knutsford Edition", edited with introductions by A. W. Ward, in eight volumes (Smith, Elder), and the "World's Classics" edition, edited by Clement Shorter, in 10 volumes (Henry Froude, 1908).