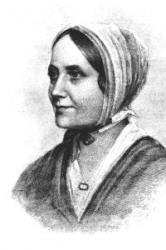 Follen, Eliza Lee, née Cabot, a well-known Unitarian writer, daughter of Samuel Cabot, born at Boston, August 15, 1787, and married, in 1828, to Professor Charles Follen, who perished on board the "Lexington," which was burnt on Long Island Sound, Jan. 13,1840. Mrs. Follen died at Brookline, Mass., 1860. She was a voluminous writer. Her Poems were first published at Boston (Crosby & Co.), 1839, and whilst she was in England she issued another volume for children's use, entitled The Lark and the Linnet, in 1854. Both volumes also contain some translations from the German, and versions of a few Psalms.

Eliza Lee Cabot Follen (August 15, 1787 – January 26, 1860) was an American writer, editor, and abolitionist. In her early life, she contributed various pieces of prose and poetry to papers and magazines. In 1828, she married Prof. Charles Follen, who died on board the Lexington in 1840. During her married life, she published a variety of popular and useful books, all of which were characterized by her Christian piety. Among the works she gave to the press are, Selections from Fénelon, The Well-spent Hour, Words of Truth, The Sceptic, Married Life, Little Songs, Poems, Life of Charles Follen, Twilight Stories, Second Series of Little Songs, as well as a compilation of Home Dramas, and German Fairy Tales. Holding an interest in the religious instruction of the young, she edited, in 1829, th
Wikipedia Biography
TextsTunesHymnals