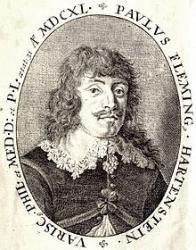 Flemming, Paul , son of Abraham Flemming or Fleming, then schoolmaster at Hartenstein, near Zwickau, Saxony (afterwards pastor of Wechselburg, near Mittweida), was born at Hartenstein, Oct. 5 or 12, 1609. He entered the St. Thomas School, Leipzig, in 1623, and matriculated at the University of Leipzig at Michaelmas, 1626, At the University he devoted himself to the study of medicine and of poetry, being laureated as a poet in 1631, and graduating M.A. in 1632. In order to find refuge from the troubles of the Thirty Years' War he went to Holstein in 1633. In the same year he joined an embassy which Duke Friedrich of Schleswig-Holstein was about to send to his brother-in-law, the Russian Czar, as gentleman in waiting and "taster." In this expedition he was engaged from Oct. 22, 1633, to April 6, 1635. He then took part in the embassy sent by the Duke to the Shah of Persia, with the object of opening up the way for trade and Christianity into Central Asia. They set sail from Travemünde, near Lübeck, Oct. 27, 1635, and returned to Gottorf, Aug. 1, 1639. The expedition proved fruitless, and the many dangers and great hardships encountered broke Flemming's health. To qualify himself for medical practice in Hamburg he went to the University of Leyden, where he graduated M.D. in 1640; but shortly after his return to Hamburg he died there, March 25 (April 2), 1640 (Koch, iii. 73-82; Allgemeine Deutsche Biographie, vii. 115-117).

Flemming was of an energetic temperament, with an ardent patriotism, and a deep love for the Evangelical Cause. He was a gifted poet, of true and deep feeling, who could write charming descriptions of the beauties of nature, and sweet and tender love songs. His secular poems, however, as a whole have the faults of the Silesian school of Martin Opitz; and it is by his hymns, and especially by his classical "In allen meinen Thaten," that his name lives.

His poems were first collected by the father of his betrothed as D. P. Fleming's Teutsche Poemata, and appeared in 1642 in two editions nearly alike, one at Naumburg and Jena, the other at Lübeck. The most complete edition is that by J. M. Lappenberg, 2 vols., Stuttgart, 1865-66. Of his 41 religious poems (12 hymns, 9 odes, 20 sonnets) three have passed into English.

i. In alien meinen Thaten . Trust in God. This beautiful hymn was written in November, 1633, just before he started with the embassy to Moscow (see above); and may often have cheered his own sinking spirit then and in the more trying adventures of the second embassy. It first appeared in his Teutsche Poemata , 1642 (Lübeck edition, p. 287; Lappenberg's edition, i. p. 236), as No. 4 in Book i. of the Odes, in 15 stanza of 6 1. It was included in the Stralsund Gesang-Buch, 1665, Freylinghausen's Gesang-Buch , 1704, and almost all recent collections. Sometimes, as in the Unverfalschter Liedersegen, 1851, No. 646, it is given in full, but more frequently the special stanzas appropriate for travellers (vi.-ix., xiii., xiv.) are omitted. It is characterised in Koch, viii. 379, as a "pilgrim song suited for the Christian journey which we must all in faith make through joy and sorrow to our Eternal Home." Lauxmann adds that it has often been used appropriately at weddings, was the favourite hymn of Friedrich Wilhelm III. of Prussia, and was sung at the service in the Cathedral of Berlin, July 19, 1870, on the open¬ing of the North German Diet immediately before the Franco-Prussian War. Translated as:—
I leave to His good pleasure , a translation of st. i., ii., iv, by A. T. Russell, as No. 232 in his Psalms & Hymns , 1851.

Paul Fleming, also spelt Flemming (5 October 1609 – 2 April 1640), was a German physician and poet. As well as writing notable verse and hymns, he spent several years accompanying the Duke of Holstein's embassies to Russia and Persia. He also lived for a year at Reval on the coast of Estonia, where he wrote many love-songs.
Wikipedia Biography
TextsTunesHymnals