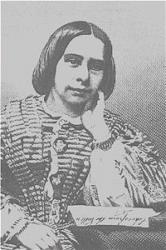 Hearn, Marianne, known to the public only by her nom deplume of Marianne Farningham, was born at Farningham, in Kent, Dec. 17, 1834. She resided for short periods at Bristol and Gravesend, and since 1865 at Northampton. Miss Farningham is a member of the Baptist denomination. Her literary work has been done chiefly in connection with the Christian World newspaper, on the staff of which she has been from its first publication. She is also editor of the Sunday School Times. Most of her contributions to the Christian World have been republished in book form, and include:—
(1) Lays and Lyrics of the Blessed Life, 1861. (2) Poems, 1865. (3) Morning and Evening Hymns for the Week, 1870. (4) Songs of Sunshine, 1878.
From these works the following hymns have passed into common use:—
1. Father Who givest us now the New Year. Old and New Year. From her Songs of Sunshine, 1878.
2. Hail the children's festal day. Sunday School Anniversaries. Appeared in the Sunday School Times, 1875.
3. Let the children come, Christ said. Christ's invitation of children. In G. Barrett's Book of Praise for Children, 1881. It was written in 1877.
4. When mysterious whispers are floating about. Death anticipated. Appeared in the Christian World, in the Autumn of 1864; and again in her work, Poems, 1865. In I. D. Sankey's Sacred Songs & Solos, it is entitled "Waiting and Watching for me" (the refrain of each stanza), and is altered to "When my final farewell lo the world I have said." This is the most popular of Miss Hearn's hymns. [Rev. W. R. Stevenson, M.A.]