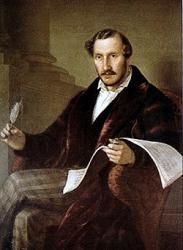 Donizetti came from a non-musical background but, at an early age, he was taken under the wing of composer Simon Mayr who had set up the Lezioni Caritatevoli and had enrolled him by means of a full scholarship. There he received detailed training in the arts of fugue and counterpoint, and it was from there that Mayr was instrumental in obtaining a place for the young man at the Bologna Academy. In Bologna, at the age of 19, he wrote his first one-act opera, the comedy Il Pigmalione, although it does not appear to have been performed during his lifetime.

Through his life, Donizetti wrote about 70 operas, but an offer in 1822 from Domenico Barbaja, the impresario of the Teatro San Carlo in Naples, which followed the composer's ninth opera, led to his move to that city and the composition of 28 operas which were given their premieres at that house or in one of the city's smaller houses including the Teatro Nuovo or the Teatro del Fondo. This continued until the production of Caterina Cornaro in January 1844. In all, Naples presented 51 of Donizetti's operas.

During this period, success came primarily with the comic operas, the serious ones failing to attract significant audiences. However, the situation changed with the appearance in 1830 of the serious opera, Anna Bolena which was the first to make a major impact on the Italian and international opera scene and, at the same time, to shift the balance for the composer away from success with only comedic operas. However, even after 1830, his best-known works did also include comedies such as L'elisir d'amore (1832) and Don Pasquale (1843). But significant historical dramas did appear and became successful, sometimes outside Naples before reaching that city. Most significantly, they included Lucia di Lammermoor (the first to be written by librettist Salvadore Cammarano) in 1835, as well as "one of [his] most successful Neapolitan operas", Roberto Devereux in Up to that point, all of his operas had been written to Italian librettos.

However, moving to Paris in 1838, Donizetti set his operas to French texts; these include La favorite and La fille du régiment and were first performed in that city from 1840 onward. It appears that much of the attraction of moving to Paris was not just for larger fees and prestige, but his chafing against the censorial limitations which existed in Italy, thus giving him a much greater freedom to choose subject matter. By 1845 severe illness caused him to be moved back to Bergamo to die in 1848.

Along with Gioachino Rossini and Vincenzo Bellini, he was a leading composer of bel canto opera during the first fifty years of the Nineteenth Century.

The youngest of three sons, Donizetti was born in 1797 in Bergamo's Borgo Canale quarter located just outside the city walls. His family was very poor and had no tradition of music, his father Andrea, being the caretaker of the town pawnshop. Simone Mayr, a German composer of internationally successful operas had become maestro di cappella at Bergamo's principal church in 1802 and he then founded the Lezioni Caritatevoli school in Bergamo in 1805 for the purpose of providing musical training, including classes in literature, beyond that which choirboys ordinarily received up until the time that their voices broke. In 1807, Andrea Donizetti attempted to enroll both his sons, but the elder, Giuseppe (then 18), was considered too old. Gaetano (then 9) was accepted.

While not especially successful as a choirboy during the first three trial months of 1807, there being some concern about a diffetto di gola (throat defect), in every other regard Mayr was reporting that Gaetano "surpasses all the others in musical progress". Mayr was able to persuade the authorities that the young boy's talents were worthy of keeping him in the school, and he remained there for nine years until 1815.

However, as William Ashbrook notes, in 1809 he was threatened with having to leave because his voice was changing. In 1810 he applied for and was accepted by the local art school, the Academia Carrara, but it is unknown whether he attended classes. Then, in 1811, Mayr once again intervened. Having written both libretto and music for a "pasticcio-farsa", Il piccolo compositore di musica, as the final concert of the academic year, he cast five your students amongst them Donizetti, his young pupil, as "the little composer". As Ashbrook notes this "was nothing less than Mayr's argument that Donizetti be allowed to continue his musical studies".

In Bologna, he justified the faith which Mayr had placed in him and in 1816 he wrote what Allitt describes as "his initial exercises in operatic style", the opera Il pigmalione, as well as composing portions of Olympiade and L'ira d'Achille in 1817, these two being no more than "suggest[ing] the work of a student". Encouraged by Mayr to return to Bergamo in 1817, he began his "quartet years" as well as composing piano pieces and most likely being part of quartets where he would have played and heard music of other composers. In addition, he began seeking employment.

After some minor compositions under the commission of Paolo Zancla, Donizetti wrote his ninth opera, Zoraida di Granata. This work impressed Domenico Barbaia, a prominent theatre manager, and Donizetti was offered a contract to compose in Naples. Writing in Rome and Milan in addition to Naples, Donizetti achieved some popular success in the 1820s (although critics were often unimpressed). It was not until 1830 that he became well known internationally, when his Anna Bolena was premiered in Milan, and this brought him instant fame throughout Europe.

L'elisir d'amore, a comedy produced in 1832, came soon after, and is deemed to be one of the masterpieces of 19th-century opera buffa (as is his Don Pasquale, written for Paris in 1843). Shortly after L'elisir d'amore, Donizetti composed Lucia di Lammermoor, based on The Bride of Lammermoor, the novel by Sir Walter Scott. This became his most famous opera, and one of the high points of the bel canto tradition, reaching a stature similar to that of Bellini's Norma.

Donizetti's wife, Virginia Vasselli, gave birth to three children, none of whom survived. Within a year of his parents' deaths, on 30 July 1837 his wife died from cholera. By 1843, Donizetti was exhibiting symptoms of syphilis and probable bipolar disorder. After being institutionalized in 1845, he was sent to Paris, where he could be cared for. After visits from friends, including Giuseppe Verdi, Donizetti was taken back to Bergamo, his hometown. After several years in the grip of insanity, he died in 1848 in the house of a noble family, the Scotti. Donizetti was buried in the cemetery of Valtesse but in the late 19th century his body was transferred to Bergamo's Basilica of Santa Maria Maggiore near the grave of his teacher Simon Mayr.

Donizetti, a prolific composer, is best known for his operatic works, but he also wrote music in a number of other forms, including some church music, a number of string quartets, and some orchestral pieces. Altogether, he composed about 75 operas, 16 symphonies, 19 string quartets, 193 songs, 45 duets, 3 oratorios, 28 cantatas, instrumental concertos, sonatas, and other chamber pieces.