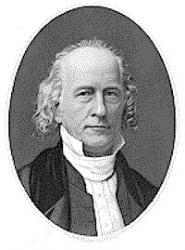 Doane, George Washington, D.D. Bishop Doane was born at Trenton, New Jersey, May 27, 1799, and graduated at Union College, Schenectady, New York. Ordained in 1821, he was Assistant Minister at Trinity Church, New York, till 1824. In 1824 he became a Professor at Trinity College, Hartford, Conn.; in 1828 Rector of Trinity Church, Boston; and, in 1832, Bishop of New Jersey. He founded St. Mary's Hall, Burlington, 1837, and Burlington College, Burlington, 1846. Died April 27, 1859.  Bishop Doane's exceptional talents, learning, and force of character, made him one of the great prelates of his time. His warmth of heart secured devoted friends, who still cherish his memory with revering affection. He passed through many and severe troubles, which left their mark upon his later verse. He was no mean poet, and a few of his lyrics are among our best. His Works, in 4 volumes with Memoir by his son, were published in 1860. He issued in 1824 Songs by the Way, a small volume of great merit and interest. This edition is now rare. A second edition, much enlarged, appeared after his death, in 1859, and a third, in small 4to, in 1875. These include much matter of a private nature, such as he would not himself have given to the world, and by no means equal to his graver and more careful lyrics, on which alone his poetic fame must rest.The edition of 1824 contains several important hymns, some of which have often circulated without his name. Two of these are universally known as his, having been adopted by the American Prayer Book Collection, 1826:--

1. Softly now the light of day. Evening. This, in addition to its use in American hymnals, is also found in the English Collections, including Snepp's Songs of Grace & Glory.   Written in 1824.
2. Thou art the way, to Thee alone. Christ the Way. This, in the judgment of many, is the first of American hymns, and one of the most admirable and useful in the English language. In the United States its use is most extensive, and since its introduction into the English Collections by Bickersteth in 1833, Hall in his Mitre, in 1836, and others, it has grown in favour until it ranks with the most popular of the great English hymns.

Near in merit to the foregoing stands a companion piece in the same work, which deserves to be better known :—

3.  Lord, should we leave Thy hallowed feet.

The next three have been overlooked at home, but have obtained considerable circulation in English Collections.

His later hymns, the dates of which are generally preserved in the last edition of his Songs by the Way, include the following, which are more or less in use :—