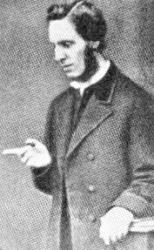 Rv Samuel O'Malley Gore Cluff (Clough) United Kingdom 1837-1910. Born in Dublin, Ireland, he attended Trinity College and became a minister in the (Anglican) Church of Ireland. He pastored at various locations in Ireland. In 1884 he became leader of the Plymouth Brethren. He married Anne Blake Edge. They had four children. He wrote hymn poems and about 1000 songs. He composed many melodies and oratories. He died in Abbeyleix, Ireland. While holding crusades in Scotland with D. L. Moody, Ira Sankey came across Cluff's poem about prayer and composed the music for it, used in subsequent crusades.