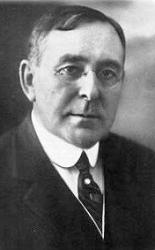 Rv John Wilbur Chapman DD LLD USA 1859-1918. Born in Richmond, IN, he attended Quaker Day School and Methodist Sunday school. At age 17 he made a public declaration of his Christian faith and joined the Richmond Presbyterian Church. He received his seminary degree from Lane Theoloical Seminary, Cincinnati, OH. He was later awarded a Doctorate in Divinity from the College of Wooster, and an LL.D. from Heidelberg University. In 1882 he married Irene Steddon. They had a daughter. His wife died in 1886. In 1888 he married Agnes Pruyn Strain, and they had four children. His second wife died in 1907. In 1910 he married Mabel Cornelia Moulton. He held six pastorates in OH, IN, NY, PA, NY, NY before becoming an evangelist, generally traveling with gospel singer, Charles Alexander. In 1893 he preached with D. L. Moody. Billy Sunday was one of his disciples on the circuit. In 1895 he was appointed Corresponding Secretary of the Presbyterian General Assembly's Committeee on Evangelism, overseeing activities of 51 evangelists in 470 cities. He developed campaign tactics to maximize evangelical successes, trying them first in Pittsburgh, then Syracuse. With funding from philanthropist, John H. Converse, a wealthy Presbyterian, Chapman joined with Alexander to launch evangelical campaigns in 1907. He assembled 21 evangelistic teams after that to cover 42 sections of Philadelphia, preaching for several weeks. 8000 conversions resulted. They repeated this in NC. In 1909 they started a worldwide campaign in Vancouver, BC, and took in cities in Australia, the Phillipines, China, Korea, and Japan. Chapman also held religious summer conferences at Winona Lake, IN, Montreat, NC, and Long Island, NY. Mass evangelism was losing favor in 1910, so he was back holding large revivals with Alexander in 1912. He was also elected moderator of the Presbyterian Church General Assembly, and under so much stress, he developed gall stones. The surgery was too much, and he died two days later. He was also a prolific writer of religious works and hymn lyrics. 19 works.