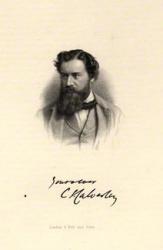 Calverley, Charles Stewart, M.A., son of the Rev. Henry Blayds, some time Vicar of South Stoke, near Bath (who took the name of Calverley in 1852), was born at Hartley, Worcestershire, Dec. 22, 1831. He entered Harrow in 1846, from whence he passed to Oxford, but coming under the censure of the authorities, he migrated to Cambridge in 1852, where, after gaining some of the best classical prizes of that University, he graduated first class in Classical honour?. In due course he was called to the Bar and followed the Northern circuit. He died at Folkestone, Feb. 17, 1884. He is known to hymnody through several translations from the Latin, which he made for the Hymnary in 1871, and were published therein in 1872.