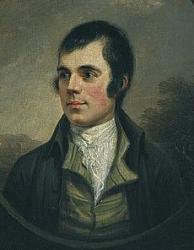 Burns, Robert. This poet's life had little in common with hymnology, although some of his pieces, in common with a few of Byron's, have come into use in Great Britain and America. His life, from his birth in the parish of Alloway, near Ayr, Jan. 25, 1759, to his death, at Dumfries, July 21, 1796, was one of varying lights and shadows, and has been told elsewhere, frequently and eloquently. It remains for us only to name his sacred pieces, their origin, and their use. Those in common use are:—
1. O Thou great Being! What Thou art. Lent. Burns's account of this piece as entered in his Common¬place Book, under the date of "March, 1784," is:—
"There was a certain period of my life that my spirit was broken by repeated losses and disasters, which threatened, and indeed effected, the utter ruin of my fortune. My body, too, was attacked by that most dreadful distemper a hypochondria, or confirmed melancholy. In this wretched state, the recollection of which makes me shudder, I hung my harp on the willow-trees, except in some lucid intervals, in one of which I composed the following, 'Oh, Thou Great Being! what Thou art, &c.'" Chambers says in his Life and Works of Burns, 1850 (Library edition, 1856), vol. i.,p. 57, that financial and physical downfall was in 1781, when the poet was 23. At the same time he wrote, "Winter, a Dirge." From the latter the hymn:—
2. Thou Power Supreme, Whose mighty scheme, Trust in God, is taken. The second piece was published in his Poems, Kilmarnock, 1786, and the first in Poems, Edinburgh, 1787. Original text in Chambers's Life, vol. i. pp. 67-58. The title of the first is "A Prayer, written under the pressure of violent anguish."
3. O Thou unknown, Almighty Cause. Death anticipated. This was written at the age of 26, during an illness in the summer of 1784. In his Commonplace Book he calls it, "A Prayer when fainting fits and other alarming symptoms of a pleurisy, or some other danger¬ous disorder which still threatens me, first put nature on the alarm." Under the title “A Prayer in the prospect of death," it was included in his Poems, Kilmarnock, 1786.
4. The [that] man in life wherever placed. Ps. i.
5. O Thou, the first, the greatest Friend. Ps. xix. Chambers (Life, vol. i. pp. 86-87) has given these two Psalm versions to the samedate as No. 3, and attributes them to the same cause. They were published in the Edinburgh edition of his Poems, 1787. Orig. text in Life, &c, vol. i. pp. 86-87.
These hymns were all included in Dr. Maitineau's Hymns, &c, 1840, and are also found in other and later collections both in Great Britain and America.

Robert Burns (25 January 1759 – 21 July 1796), also known familiarly as Rabbie Burns, the National Bard, Bard of Ayrshire, the Ploughman Poet and various other names and epithets, was a Scottish poet and lyricist. He is widely regarded as the national poet of Scotland and is celebrated worldwide. He is the best known of the poets who have written in the Scots language, although much of his writing is in a "light Scots dialect" of English, accessible to an audience beyond Scotland. He also wrote in standard English, and in these writings his political or civil commentary is often at its bluntest.
Wikipedia Biography
TextsTunesHymnals