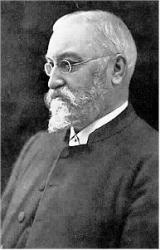 Ethelbert William Bullinger DD United Kingdom 1837-1913. Born in Canterbury, he was an Anglican clergyman, Biblical scholar, and ultradispensationalist theologian and writer. Educated at King's College, London, he became a good organist, singer, and composer. He married Emma Dobson, 13 years his senior, and they had two sons. In 1861 he began as Associate Curate to the parish of St. Mary Magdelene, Bermondsey, and was ordained as priest in the Church of England in 1862. He served as parish curate in Tittleshall until 1866, then Notting Hill until 1869, them Leytonstone to 1870, and finally Walthamstow, until becoming Vicar of the new parish of St. Stephen's in 1874. He resigned his vicarage in 1888. In 1867 he was clerical secretary of the Trinitarian Bible Society, which he held (except for illnesses) until his death. The Society completed and published a Hebrew version of the New Testament, the Tanakh (introduction to the Hebrew Bible), formation of the Brittany evangelical Mission Society under Pasteur LeCoat and translation of the Bible into Breton, also producing the first ever Protestant Portuguese reference Bible. It also distributed Spanish Bibles in Spain after the 1868 Spanish Revolution. Bullinger, a practiced musician, collected and harmonized untranscribed hymns on his visits to Tremel, Brittany. He wrote many articles, edited a monthly journal “Things to come”. He wrote 4 Biblical works (16 works).