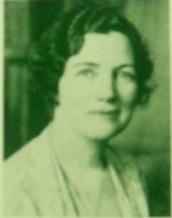 Daughter of William Caruthers Morris and Anna Virginia Foster, and wife of John Preston Buchanan, Anna received her musical training at the Landon Conservatory of Music, Dallas, Texas (to which she received a scholarship at age 15); the Guilmant Organ School, New York; and studying with Emil Liebling, William Carl, and Cornelius Rybner, among others. She taught music in Texas; at Halsell College, Oklahoma (1907-08); and at Stonewall Jackson College, Abingdon, Virginia (1909-12). In 1912, she married John Preston Buchanan, a lawyer, writer, and senator, from Marion, Virginia; they moved to their home, Roseacre, in Marion, where they had four children.

Buchanan served as president of the Virginia Federation of Music Clubs in 1927, and helped organize the first Virginia State Choral Festival in 1928, and White Top Folk Festivals (1931-41). After her husband’s death in 1937, she sold Roseacre and moved to Richmond, Virginia, with her two youngest children. She taught music theory and composition and folk music at the University of Richmond (1939-40); during the summers, at the New England Music Camp, Lake Messalonskee, Oakland, Maine (1938-40); and at the Huckleberry Mountain Artists Colony near Hendersonville, North Carolina, in 1941. She later moved to Harrisonburg, Virginia, and taught at Madison College (1944-48). In 1951, she moved to Paducah, Kentucky. She later became the archivist of the folk music collecting project of the National Federation of Music Clubs, serving until 1963. Buchanan’s works include: