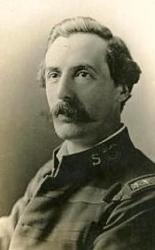 Rv Ballington Booth United Kingdom 1857-1940 Born in Brighouse, England, the 2nd son of William Booth and Catherine Booth, founders of the Salvation Army, he became a Christian minister. In his teens he began preaching, singing and playing his concertina at open-air meetings sponsored by the Salvation Army. He became a Colonel in that organization at 23 and was positioned as a training officer. He later moved to Australia, followed by the U.S., and then Canada. He married Maud Charlesworth in 1886. Together they were assigned to the U.S., as the Salvation Army was becoming a world-wide organization. They became American citizens the following year, During the 1890s depression the Booths established shelters for homeless men. Although they played a great part in organizing and structuring the Salvation Army in America, Ballington disagreed with his brother, Bramwell, Chielf of Staff, and his father about being reassigned to areas outside the U.S., and he and his wife stayed in the U.S., establishing a new organization in 1896, Volunteers of America. It was not intended to interfere or take from the coffers of the Salvation Army, headquartered in England by his parents, but two-thirds of the volunteers left the Salvation Army and joined VOA. Many of the Salvation Army supporters also went with VOA. He became its first General (1896-1940). On his demise, his wife, Maud, assumed his roll as VOA General.

Ballington Booth (July 28, 1857 – October 5, 1940) was a British-born American Christian minister who co-founded Volunteers of America, a Christian charitable organization, and became its first General (1896-1940). He was a former officer in The Salvation Army.
Wikipedia Biography
TextsTunesHymnals