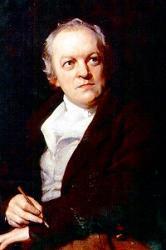 Blake in a portrait by Thomas Phillips (1807)