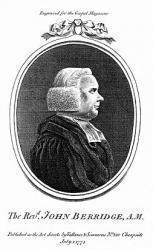 Berridge, John, born at Kingston, Notis, March 1, 1716, and educated at Clare Hall, Cambridge. In 1749 he was ordained as curate to the parish of Stapleford, near Cambridge, and in 1755 he was preferred to the Vicarage of Everton, where he died Jan. 22, 1793. His epitaph, written by himself for his own tombstone (with date of death filled in), is an epitome of his life. It reads:—

" Here lies the remains of John Berridge, late Vicar of Everton, and an itinerate servant of Jesus Christ, who loved his Master and His work; and after running on His errands for many years, was caught up to wait on Him above. Reader! art thou born again? (No salvation without a new birth.) I was born in sin, February, 1716; remained ignorant of my fallen state till 1730; lived proudly on faith and works for salvation till 1754; was admitted to Everton Vicarage, 1755; fled to Jesus for refuge, 1755; fell asleep in Jesus, January 22,1793."

The first collection of Berridge's hymns was published as A Collection of Divine Songs, 1760. This was subsequently suppressed. In 1785 his Sion's Songs; or, Hymns composed for the use of them that love and follow the Lord Jesus Christ in Sincerity were published. The work contains 342 hymns, some of which had previously appeared in the Gospel Magazine (from 1775 to 1777, 20 in all), under the signature of "Old Everton" and others were adapted from C. Wesley. The most popular of these in modern collections are, "Jesus, cast a look on me;" "O happy saints who dwell in light;” and "Since Jesus freely did appear." Concerning his hymns published in 1785, he says in his Preface:—

“Twelve years ago these hymns were composed in a six months' illness, and have since laid neglected by me, often threatened with the fire, but have escaped that martyrdom."

Berridge, John, p. 138, i. The 1842 edition of his Sion's Songs has an elaborate preface by J. C. Philpot, the editor. From this collection the following additional hymns are in common use:—
1. I ask my dying Saviour dear. Sealed by Christ.
2. Lord Jesus, Who didst once appear. Holy Matrimony. An altered form of "Since Jesus freely did appear," p. 1059, i.
3. Soon as faith the Lord can see. None but Jesus.

John Berridge (1 March 1716 − 22 January 1793) was an Anglican evangelical revivalist and hymnist. J. C. Ryle wrote that as one of "the English evangelists of the eighteenth century" Berridge was "a mighty instrument for good."
Wikipedia Biography
TextsTunesHymnals