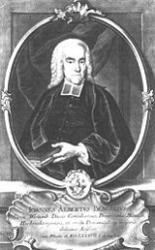 Bengel, Johann Albrecht, son of Albrecht Bengel, diaconus at Winnenden, near Waiblingen, Wurtternberg, was born at Winnenden, June 24, 1687. After the completion of his theological studies at Tubingen (M.A. 1704, D.D. 1751), he became assistant at Metzingen, near Urach, in 1707, Repetent at Tubingen in 1708, and assistant (general preacher) at Stuttgart in 1711. In 1713 he was appointed Preceptor and preacher at the Cloister School of Denkendorf, near Esslingen. His pupils were mostly preparing for the Church, and during his tenure of office some 300 passed through his hands. In 1741 he was appointed Prelate of Herbrechtinge ; and in 1749 Prelate of Alpirsbach (the highest post in the Church of Württemberg) and member of the Consistory. He died at Stuttgart, Nov. 2, 1752 (Koch, v. 89-99, Allgemeine Deutsche Biographie, ii. 331-333; Bode, 43-14). As a theologian and ecclesiastic Bengel exercised a great and abiding influence in Württemberg. As a hymn-writer he was not prolific, and few of his hymns aro still in use. One has been translated into English, viz.;—
Ich gedenk an deine Wunden. [Cross and Consolation.] First published as a companion to Meditation v. in S. Urlsperger's Der Krjnchen Gcsundheit und der Sterbenden Leben, Stuttgart, 1723, p. 423, in 8 stanzas of 8 lines, entitled "On believing and patient suffering." Included as No. 867 in the Hannover Gesang-Buch, 1740. Sometimes erroneously ascribed to Urlsperger. The only translation in common use is, “I'll think upon the woes," omitting stanzas ii., iv., v., as No. 579, in the American Baptist Psalmist, 1843. [Rev. James Mearns, M.A.]

Johann Albrecht Bengel (24 June 1687 – 2 November 1752), also known as Bengelius, was a Lutheran pietist clergyman and Greek-language scholar known for his edition of the Greek New Testament and his commentaries on it.
Wikipedia Biography
TextsTunesHymnals