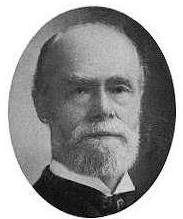 Ebenezer Beesley was born December 14, 1840, in Oxfordshire, England. He had two wives. He married his first wife in March of 1859. They left England in April of 1859 to move to Salt Lake City. They travelled by foot and handcart from Omaha with a company of 250-300 people. He married his second wife in 1869. Beesley was a musician and music teacher who directed the Mormon Tabernacle Choir in Utah from 1880-1889 and other choirs in Utah. He wrote several hymns and edited Latter-day Saints Psalmody, the first LDS hymn book with both music and words.

Dianne Shapiro from Find a Grave website, "Ebenezer Beesley Composed Nearly a Dozen Hymns in the Current Hymnbook and Conducted the Choir for Almost a Decade," from The Tabernacle Choir Blog, March 13, 2014, and "Beesley, Sarah Hancock, [Reminiscences] in Handcart Stories" from The Church of Jesus Christ of Latter-Day Saints website "Pioneer Database" (accessed 1-1-2021)

Ebenezer Beesley (14 December 1840 – 21 March 1906) was a Latter-day Saint hymn writer and composer. The music for twelve of the hymns in the 1985 English-language hymnal of The Church of Jesus Christ of Latter-day Saints (LDS Church) were written by him. Beesley was born in Bicester, Oxfordshire, England. His parents joined the LDS Church when he was quite young and he was baptized a member of the church on 22 September 1849. After serving with the Mormon Tabernacle Choir, Beesley taught music in Tooele, and then for a time in Lehi, Utah. He then moved back to Salt Lake City where he died.
Wikipedia Biography
TextsTunesHymnals