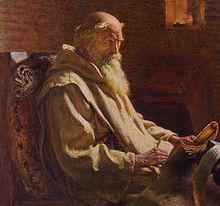 Bede (b. circa 672-673; d. May 26, 735), also known as Saint Bede or the Venerable Bede, was an English monk at Northumbrian monastery at Monkwearmouth (now Jarrow). Sent to the monastery at the young age of seven, he became deacon very early on, and then a priest at the age of thirty. An author and scholar, he is particularly known for his Ecclesiastical History of the English People, which gained him the title “Father of English History.” He also wrote many scientific and theological works, as well as poetry and music. Bede is the only native of Great Britain to have ever been made a Doctor of the Church. He died on Ascension Day, May 26, 735, and was buried in Durham Cathedral.

Laura de Jong
==========================
Bede, Beda, or Baeda, the Venerable. This eminent and early scholar, grammarian, philosopher, poet, biographer, historian, and divine, was born in 673, near the place where, shortly afterwards, Benedict Biscop founded the sister monasteries of Wearmouth and Jarrow, on an estate conferred upon him by Ecgfrith, or Ecgfrid, king of Northumbria, possibly, as the Rev. S. Baring-Gould, Lives of the Saints (May), p. 399, suggests, "in the parish of Monkton, which appears to have been one of the earliest endowments of the monastery." His education was carried on at one or other of the monasteries under the care of Benedict Biscop until his death, and then of Ceolfrith, Benedict's successor, to such effect that at the early age of nineteen he was deemed worthy, for his learning and piety's sake, to be ordained deacon by St. John of Beverley, who was then bishop of Hexham, in 691 or 692. From the same prelate he received priest's orders ten years afterwards, in or about 702. The whole of his after-life he spent in study, dividing his time between the two monasteries, which were the only home he was ever to know, and in one of which (that of Jarrow) he died on May 26th, 735, and where his remains reposed until the 11th century, when they were removed to Durham, and re-interred in the same coffin as those of St. Cuthbett, where they were discovered in 1104.
He was a voluminous author upon almost every subject, and as an historian his contribution to English history in the shape of his Historia Ecclesiastica is invaluable. But it is with him as a hymnist that we have to do here.
I. In the list of his works, which Bede gives at the end of his Ecclesiastical History, he enumerates a Liber Hymnorum, containing hymns in “several sorts of metre or rhyme." The extant editions of this work are:—
(1) Edited by Cassander, and published at Cologne, 1556; (2) in Wernsdorf's Poetae Latin Min., vol. ii. pp.239-244.
II. Bede's contributions to the stores of hymnology were not large, consisting principally of 11 or at most 12 hymns; his authorship of some of these even is questioned by many good authorities.
While we cannot look for the refined and mellifluous beauty of later Latin hymnists in the works of one who, like the Venerable Bede, lived in the infancy of ecclesiastical poetry; and while we must acknowledge the loss that such poetry sustains by the absence of rhyme from so many of the hymns, and the presence in some of what Dr. Neale calls such "frigid conceits" as the epanalepsis (as grammarians term it) where the first line of each stanza, as in "Hymnum canentes Martyrum," is repeated as the last; still the hymns with which we are dealing are not without their peculiar attractions. They are full of Scripture, and Bede was very fond of introducing the actual words of Scripture as part of his own composition, and often with great effect.
That Bede was not free from the superstition of his time is certain, not only from his prose writings, but from such poems as his elegiac "Hymn on Virginity," written in praise and honour of Queen Etheldrida, the wife of King Ecgfrith, and inserted in his Ecclesiastical History, bk. iv., cap. xx. [Rev. Digby S. Wrangham, M.A.]

Bede (/biːd/ BEED; Old English: Bǣda [ˈbæːdɑ], Bēda [ˈbeːdɑ]; 672/3 – 26 May 735), also known as Saint Bede, The Venerable Bede, and Bede the Venerable (Latin: Beda Venerabilis), was an English Benedictine monk at the monastery of St. Peter and its companion monastery of St. Paul in the Kingdom of Northumbria of the Angles (contemporarily Monkwearmouth–Jarrow Abbey in Tyne and Wear, England).
Wikipedia Biography
TextsTunesHymnals