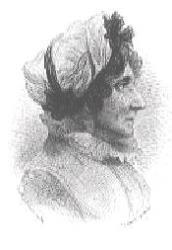 Barbauld, Anna Laetitia, née Aikin, daughter of the Rev. John Ailrin, D.D., a dissenting minister, was b. at Kibworth-Harcourt, Leicestershire, June 20, 1743. In 1753 Dr. Aikin became classical tutor at a dissenting academy at Warrington. During her residence there she contributed five hymns to Dr. W. Enfield's Hymns for Public Worship, &c, Warrington, 1772. In the following year these were included in her Poems, Lond., J. Johnson, 1773. In May, 1774, Miss Aikin was married to the Rev. Rochemont Barbauld, a descendant of a French Protestant family, and a dissenting minister. For some years Mr. Barbauld conducted, in addition to his pastoral work, a boarding school at Palgrave, Suffolk. From this he retired in 1785. In 1786 he undertook the charge of a small congregation at Hampstead, and from thence he passed to the dissenting chapel (formerly Dr. Price's) at Newington Green, in 1802. He d. Nov. 11, 1808. Mrs. Barbauld continued to reside in the neighbourhood until her death, March 9, 1825. In the latter part of the same year her niece published The Works of Anna Laetitia Barbauld, with Memoir, by Lucy Aikin, 2 vols., Lond., Longman, 1825. As a writer of hymns Mrs. Barbauld was eminently successful. Their use, however, with the exception of five contributed to Dr. W. Enfield's collection, is almost exclusively confined to the Unitarian hymnals of Great Britain and America. Including these hymnals, the whole of her hymns are still in common use. These hymns appeared thus:—

1. Again the Lord of life and light. Easter.
2. Awake, my soul, lift up thine eyes. Conflict.
3. Behold, where breathing love divine. Christian Charity.
4. Jehovah reigns, let every nation hear. God's Dominion. A part of this was given in Collyer's Sel., 1812, No. 586, as:—
5. This earthly globe, the creature of a day.
6. Praise to God, Immortal praise. Harvest.

10. Come, said [says] Jesus' sacred voice. Invitation.
11. How blest the sacred tie that binds. Christian Fellowship.
12. Lo where a crowd of pilgrims toil. Pilgrimage of Life. From this is taken:—
13. Our country is Immanuel's ground [land].

14. Sweet is the scene when virtue dies. Death.

v. Supplement to the Unitarian Coll. of Kippis, Bees, and others, 1807.

15. When as returns the solemn day. Sunday.
16. Sleep, sleep to day, tormenting cares. Sunday.
17. How may earth and heaven unite. Worship.

The more important of these hymns are annotated in this Dictionary under their first lines. Mrs. Barbauld's Hymns in Prose for Children, originally published in 1781, were long popular and have been translated into French, Italian, Spanish, and other languages.