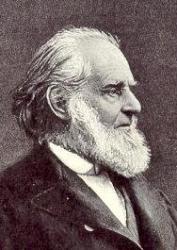 Leonard Bacon, D.D., was born in Detroit (where his father was a missionary to the Indians), February 19, 1802, and educated at Yale college and at Andover. In 1825 he was ordained Pastor of the Centre Church, New Haven, and retained that charge until 1866, when he was appointed Professor of Theology in Yale Divinity School. This professorship he resigned in 1871; but till his death in 1881, he was Lecturer on Church Polity. He died December 23, 1881. Dr. Bacon rendered important service to hymnology both as writer and compiler. While a student at Andover, he edited an important and now rare tract entitled Hymns and Sacred Songs for the Monthly Concert [of Prayer for Missions], Andover, September 1823. This contained the three hymns following, which are his:-