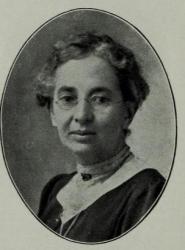 Miriam E. Arnold was born in England, but moved with her parents at the age of five. They settled in Mount Clemens, Michigan. Her family was deeply religious. Her first poem was published in 1895 and she continued to write about 100 others, almost all of which have been set to music.

Dianne Shapiro, from "The Singers and Their Songs: sketches of living gospel hymn writers" by Charles Hutchinson Gabriel (Chicago: The Rodeheaver Company, 1916)