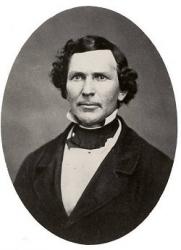 George Nelson Allen (1812-1871), studied at Western Reserve Academy in Hudson, Oh OH and with Lowell Mason in Boston. Allen gave a strong musical foundation to Oberlin College in its earliest years; in addition to being Professor of Music he also served as Professor of Geology and Natural History, Secretary and Treasurer. In 1835 he compiled The Oberlin Social and Sabbath Hymn Book, in which appeared his most well known tune MAITLAND (also known as CROSS AND CROWN or WESTERN MELODY) with the text "Must Jesus bear the cross alone?". This was adapted by Thomas A. Dorsey in 1938 for his hymn "Precious Lord, take my hand". hand." He composed anthems and wrote some additional music for Isaac Woodbury's Oratorio "Absalom." He compiled a small 3" x 4" hymnal that every student should keep in his pocket that went through several printings.